A high performance engine mechanic is a combination of brains and brawn, intermixing knowledge of nuts and bolts with the eye-hand coordination of a magician. The best high performance racing mechanics stay calm and cool under pressure. The car you work on may cost millions of dollars, may stop running in the midst of a race, and may be as complex as a spacecraft. You have to know your tools and the car, and you must know how to get the most out of each.

Besides an understanding of car engines and mechanical technology, a strong background in mathematics is vital for making calculations such as fuel consumption. Mechanics also need to be physically fit, especially in the pit where they must work quickly, often in extreme heat.

Communication skills are key to success as a high performance racing mechanic, specially  during an event when tensions are high, there’s a lot at stake, and the team must perform efficiently and cohesively to succeed. Both hearing and explaining complex ideas are part of the daily work. You may never be called upon to write a 500-word essay on “Why I Want to be in the Pit Crew at Talladega Superspeedway,” but you will need to understand multi-step instructions and explain your reasoning or solutions to racing car problems.After all, that person also needs to be intensely involved with disputes. The performance of this professional is fundamental to the result within the tracks, which makes him an indispensable part of any competition team.

One of the main peculiarities is that the cars are usually assembled entirely by the mechanics. As this work is not simple, it is imperative that the professional has knowledge and experience in all principles of automotive repair. From the structure of the vehicle to the engine, everything has to be carefully prepared and inspected by the mechanics. After all, that person also needs to be intensely involved with disputes. The performance of this professional is fundamental to the result within the tracks, which makes him an indispensable part of any race team.

And that work starts well before the moment of the competition. The preparation for the events extends for several days before and after the disputes, which requires dedication and commitment of those who want to work in the area.

In a segment such as race cars, where cars are very similar in performance, the performance of mechanics is a big differential. In the hands of these professionals is the responsibility to make the cars are in their best form at the time of going to the track.

And the psychological profile of the race car mechanic is key to success. This is because this is a work that, in addition to the precise technical performance, extreme skill and proactivity, involves an intense climate of dispute. To stay focused and motivated, the racing mechanic must assimilate this environment and the pressures he generates, so that he is not distracted, afraid, angry, arrogant, aggressive or in doubt.

And there is a lot of steps and functions for a motorsport professional like:

Team Leader / Crew Chief:
He is the person with the highest authority in the pits and pit lane, although there are cases in which he responds to a more authoritative professional outside the racetrack environment.

Mechanic Chief / Lead Tech:
Everyone communicates via radio, but the chief mechanic dictates the orders and oversees the work of the car mechanics, as well as being legally responsible for cases of car damage due to proven human failure. One of your most important tasks is to check the last details in the car (driver’s radio on, pilot properly tied and helmet buckled and all safety items, fire extinguisher operating) and release the pilot to start the engine and go to the track, leaving the pits safely.

Racing Mechanic:
Responsible for thoroughly reviewing all items of the car, controlling the equipment wear and tear, repairing, changing tires, alignment, fueling, diagnostics and accurately reporting the dynamic behavior of the car after the  track session.

Coach / Strategist / Instructor:
Responsible for managing the tire and fuel consumption of the car during track sessions, informing the rider about pit stop opportunities, deciding when to change riders, which tires should be used in a race situation, and other tasks like present and introduce all the infos about the next race, racetrack and cars to the drivers.

Instructor for other Racing Mechanics:
Recycling is necessary for every professional. And being up-to-date on technologies, professional tools, skills and practical and theoretical knowledge means gaining prominence in the market. In this sense, regardless of the situation of the professional, with recycling it is possible to renew itself and to meet the demands of its area of work; become more prepared for the transformations and the future of the market and still stand out and get competitive differentials vis-à-vis competitors.

And we present to you an unique motorsports professional, wich have performed all those functions listed above:

Vinicius has always been curious to understand how those things work. As a child, he dismantled and assembled his toys several times, until he understood how they worked. Another hobby was racing cars, because he was (and still is) fascinated by cars, a passion he inherited from his father, a big motorsport fan.

At school, his favorite classes were from the exact area, and the conversation with his classmates was always about the races he watched on the weekend. Hence the choice of profession was a leap forward.

“I had no doubts. I chose Automotive Mechanics for my preference for the mechanical and creative part, since I always liked to prepare and improve the cars more than the factory originals,” he says.

As time went by, while still a student, he began to get involved in preparing street cars, his passion, but there were no courses for that, so the experience came in the day to day of his work.

Vinícius’ entry into professional motoring came after he became aware of the danger of street races at the end of the 1990s:

“I already had enough know-how to prepare street cars, but the streets were not safe. And so I decided to go into the area of developing racing car parts for a few years until I saw how I would apply my knowledge again in a safe and healthy manner. While working as a technical consultant and developing parts and equipment for motor racing, I was looking for an opportunity to work as a race car mechanic, a very closed and limited market for professionals in Brazil.”

With the country’s economic situation very volatile, it was common to have GT3 car championships closed at the end of the first year, which discouraged new categories and new teams from coming to Brazil.

Until the arrival of the Porsche Império GT3 Cup in Brazil, with a totally sustainable format and project for many years, and with professionals trained by the headquarters in Germany.

“In 2009, after years following the category closely, there was a selection for the training of mechanics for the category, I decided to participate, I did the tests, practical and theoretical tests and intense technical training of high level and demand of the candidate, was very difficult,” he says.

The initiative worked and he was approved in the selection process. “It seemed like a very distant area, but the dream came true. It’s great to see all this up close and to be directly involved. And in a safe way, in the right place and with all the safety and training applied.

For years, the racing mechanic has been working directly with the Porsche Cup and GT3 category cars, focusing on driver support. Vinícius is responsible for analysing projects to participate in championships, training new mechanics and introducing new drivers and gentleman drivers. He participates in work on the tracks during the races, acts directly in the development of drivers and cars, but also acts in the headquarters of the teams, alternating between the testing laboratories of the components and in the workshop, performing inspection and maintenance on the cars after the races.

In the year of 2015, Vinicius Lelis was awarded “Professional Highlight” by the Porsche Império GT3 Carrera Cup Brazil, due to its rapid growth and professional evolution. “This is an award in which the professional must meet ALL the requirements, and not every year there are winners.”, Vinicius said.

Since then, only in the year of 2018 has there been awards similar to an professional at Porsche GT3 CUP, with Vinicius Lelis being the very first one of the professionals to receive such awards in Brazil.

And how’s a day of those who work at the racetrack?

“It always starts very early, on average at 6:30a.m. already at the racetrack. A meeting is held on the day’s tasks, the objectives to be achieved and the preparation for leaving the car for the track.”

And the competition between the teams means that the mechanic has to devote a lot of time and can do long working days standing up on the day, when it’s the race weekend. That’s because the difference between the classified squads in the competition is often a few hundredths, that is, the simplest modification in the car can influence the final result a lot.

“After the track sessions, it’s time to review the car for the next day, or fix it in case of crashes or damage to car components. And depending on the damage, they can go into the night repairing the car”, explains Lelis.

In addition to the designs, another job of the mechanic is to be aware of possible failures of the race cars as soon as they occur. It may seem kind of strange, like trying to guess the future, but they really do it, from statistics and dynamic behavior of the car and analysis done during races.

“The perfect race is the one where you cover and analyze all the possibilities before the race starts and tell the engineers what’s going on in the car and if something is working wrong,” says Vinicius.

There are many factors that influence the performance of a car: wet track, dry track, higher or lower temperature, a slower car in front of the driver of your team… Depending on the situation, the cost of co-driving is very high.

Vinicius spends a lot of time studying the regulation of the categories he participates in so that he can improve the car within the rules and develop the driver’s performance as well.

To conclude, an important tip from Vinicius Lelis: “Fantastic things can happen at random. You have to be open to different experiences, nothing starts big, value small tasks and small beginnings. I’ve already washed the team’s truck, served meals for the members, cleaned the floor, parts, loaded tires, fuel. Always leave your comfort zone, try to read and learn not only about Motorsport, but about the team that is, know what your driver does and who he is, always say that luck is the combination of preparation with opportunity.

*Currently Vinicius Lelis is changing jobs. He is leaving a large team of Porsche cars based in Brazil, to work with Porsche Cup USA and Canada, one of the strongests and most difficult championships in the world, the WeatherTech SportsCar Championship by IMSA, in the United States. For strategic reasons, we cannot reveal the names of the companies.” 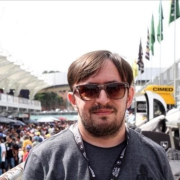